On returning to the ring: Q&A with Gabe Goldman

Gabe Goldman (2-0) squares off with Junior Romeo Payano (2-0) on Stout Fights Muay Thai 3. Their bout is already noteworthy due to their undefeated status and that classic statement; “only one will leave the ring still undefeated”. Goldman’s return to the ring after twelve years away adds another level of interest to their match. Goldman first started training in Muay Thai in Richmond, Virginia; training under Jarrett Church at Richmond Brazillian Jui Jitzu and Self Defense Academy. He then trained a few years under Willie Chapman at WC Muay Thai in Penn Hills, PA, and most recently has been training at Stout Training in the strip district of Pittsburgh, PA. If those facts were not enough to make a fan interested in this clash of Muay Thai artists, Goldman’s career may be just enough to peak interest. Goldman balances training camp with working for Carnegie Mellon University where he develops prototype robotic systems for the military, agricultural, mining, and commercial markets.

What led you to start training kickboxing?

Muay thai was the first martial art I have done. In high school I did do wrestling, so when I got to college a friend of mine encouraged me to try a local BJJ gym in Richmond, Va. When there I gave Muay Thai a shot and feel in love with the sport. I have been training Muay Thai since.

You are currently undefeated with two wins. What has been working for you?

My last fights were back in college almost 12 years ago. Back for those fights I dedicated my life outside of school to training, conditioning, weight prep, and focus. I feel like I have worked 10x harder for this fight camp because the level of the guys and girls on our fight team has been off the charts. They have pushed me to hone my skills even more and be ready for next weekend.

For me kickboxing has been the constant thing in my life that has helped me deal with stress. When I train the rest of the world melts away and I get to focus on myself and my technique. When I am training and sparing I have always seen Muay Thai as much of a mental sport as a physical one. Knowing how to read your opponent and counter-act has been just as hard of a skills to hone as any of my physical techniques. As I train harder for fight camps, there ends up being a real cost to your body, your social life, and your energy when not in the gym. It has taken extra effort to ensure that I focus not just on the fight camp but making sure all the other aspects of my life stay engaged as well.

What are you learning about yourself during your training and fights?

I’ve learned that I can push my body harder and harder after every day I train. So much of fight training for me is getting the mental training that your body can push itself so far beyond where it usually is during normal training.

What is the advice you would give to somebody just starting out in this sport?

Relax! So many people walk into the gym and try to muscle their way through learning the sport. Once you breathe and relax you can listen to your body and work that technique better and better. 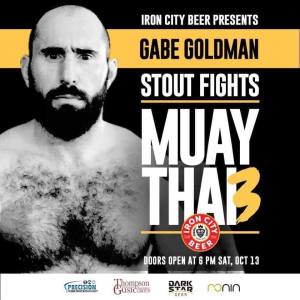 What does it mean to you that both you and your opponent are undefeated?

The fact that we are both undefeated means that I get to put the last 12 years of training to the test. This fight is less about who my opponent is and is more about pushing my body to a whole new level. In a way I see this as a brand new start to my ring fighting career because I am a much different fighter than I was back then.

Who have been the most instrumental in helping you prepare for this fight?

I would not be able to get to the level of preparedness without the training team at Stout Pittsburgh. Kru David Reese, Will, and Rocky have been phenomenal to help me push my skills to a new level. Also, the whole fight team that I’ve had the pleasure of training with most days of the week have been the best motivation to train hard I could have ever asked for.

Doors open at 6pm on October 13th at the Printscape Arena at Southpointe. General admission is $30 and ringside $50.