After Action Review with Lateesha Mohl

Lateesha Mohl battled Madelyn Grimaldi on December 8th at USKA: Reloaded. The result was a split decision win for the “Honey Badger”, who improved to a 4-0 kickboxing record. The 115lb fight was named “fight of the night”, validating the intensity of the action filled clash. Mohl sat down with FSM and continued that ARR series by giving insights into her highly contested bout.

What is your mindset headed into fights?

My mindset is usually the same for all fights. I focus on the process and what needs to be done in order to be successful. I always act as if I’m fighting the best fighter in the world, so I don’t hold anything back.

What felt the best during the fight for you? What worked the best for you?

What felt best for me was my cardio and mental mindset. I think what worked best was the help from my corner consistently telling me what to do

What did you learn about yourself from this fight?

I did learn a lot about myself. I learned that I can still push through and come out with a win against a very tough opponent. I also learned a lot of things that I need to work on for future fights.

Your fight was filled with action from start to finish and went all the way to a split decision. What are your thoughts on the result and your overall performance?

I re-watched my fight 2-3 times, and after re-watching it I had the fight scored at LEAST 2-1 in my favor. I am not upset with the result of the fight being a split decision, it was an extremely close fight.

Your Fight won fight of the night honors. What does that mean to you?

I have never won fight of the night before, so I thought that was really fricken cool. It felt awesome to know that a lot of the spectators agreed as they congratulated both myself and Madelyn.  It definitely was a proud moment for myself. 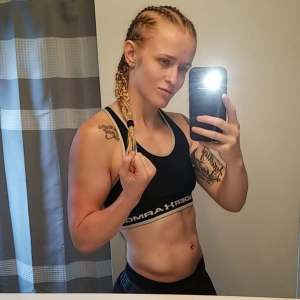 You have the reputation for wanting to take fights all the time. Why is this?

I am not sure what the reason is for constantly taking fights. Every time I have a fight I always tell myself, “You gotta take a break and relax” and of course that never works. I am just super dedicated to the sport and I have a vision, so I refuse to quit working until I get where I want to be.

What are your next plans fight wise?

I don’t really have anything planned at the moment. I would like to take 2019 to focus more on my MMA and improve my skillset in that area. I would also like to take 1-2 MMA fights in 2019 to test my new skillset.