Joe Sanderson heads into his amateur match up with Mark Leibach as part of Stout Fights Muay Thai 3 on October 13th 2018 carrying a 1-0 record. Sanderson is one of the many fighters on the card training in, and representing Stout Training Pittsburgh; the gym putting on the card.

What got you into training kickboxing? Had you done other martial arts first/ other sports?

I had a friend who trained Muay Thai years ago and competed in several different states. He encouraged me to join him but with life the way it is, it never lined up for me. Years passed and finally I had the time and drive to give it a go and it’s been addictive since then. I was always enamored with Thai culture and the way it manifests in their national sport. As a kid I participated in Tae Kwon Do but it never really stuck for me. I grew up playing hockey at a pretty high level and that took up most of my free time as a youth and then adolescent.

How long had you been training before you wanted to fight?

I went into my first class with the mindset that this would end up being whatever it could be, if just a hobby and something fun to do a couple times a week, a way to get into and stay in shape, or if I took to it and it became something I wanted to compete in. As I said it was immediately addictive for me and I think fairly early on I figured I’d like to eventually fight. I waited until my trainers brought it up though before I truly deemed myself ready to start fighting.

What have you learned about yourself/ the sport of Muay Thai through your two fights so far? 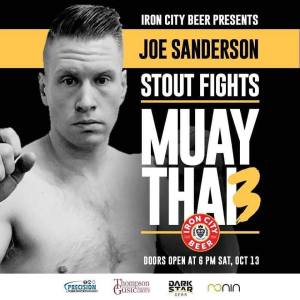 What is your mindset headed into this fight?

I’m having a lot of fun learning and getting better. I want to continue that and I’m not sure there’s a better way to do so than through competition. I’d like to successfully employ a gameplay and win the fight, obviously, but I’d also like to come out the other end a more complete fighter. That was definitely the case with my last fight.

What is your biggest piece of advice for someone just starting out in Muay Thai?

Take the time to look into the history and tradition of the sport as it is in Thailand, as I think it can be a really rewarding experience. There is a lot there that might not be obvious, or might not be found in more traditional martial arts. Don’t try to win at sparring or in training, try to forget the ego and be open to every lesson that comes, including those that come with getting beat up a little.

Who helped you the most in this training camp?

My team mates and trainers who have carved time out of their personal lives to be there for us every night in the gym helping us prepare.

Doors open at 6pm at the Printscape arena at Southpointe. General admission is $30 and ringside $50.